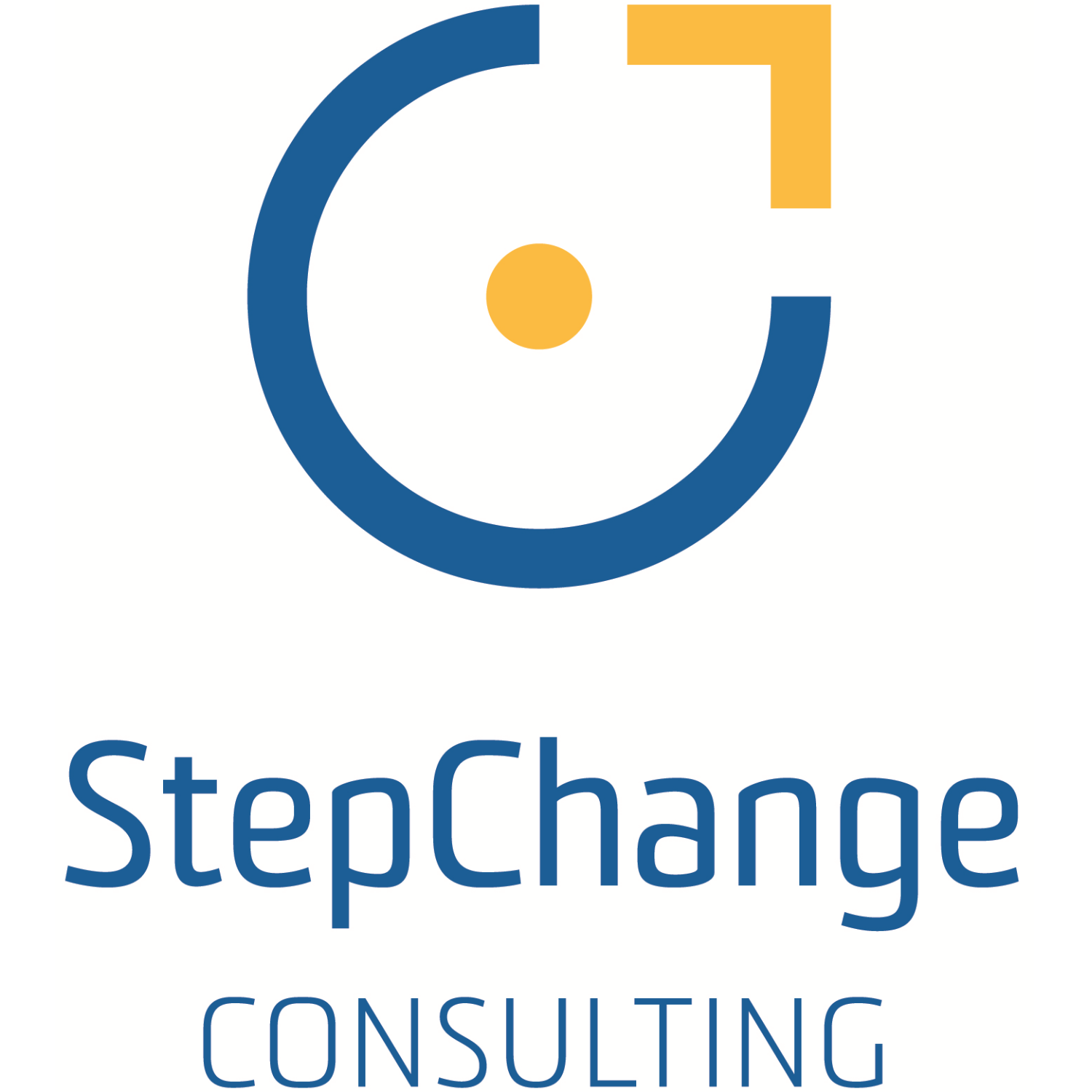 By Ralf Möbus, 2021
COVID-19: A Catalyst for Digitalization: The impact of Covid-19 on market outlooks, company performance and digitalization 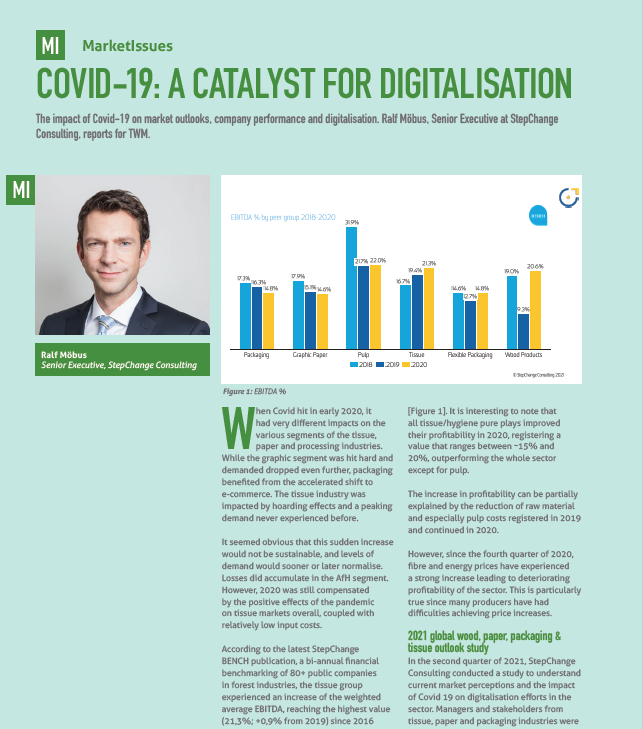 Download
NO GOOD SWAMP? OR HEALTHY FOREST?
How to know the value of a remote forest? 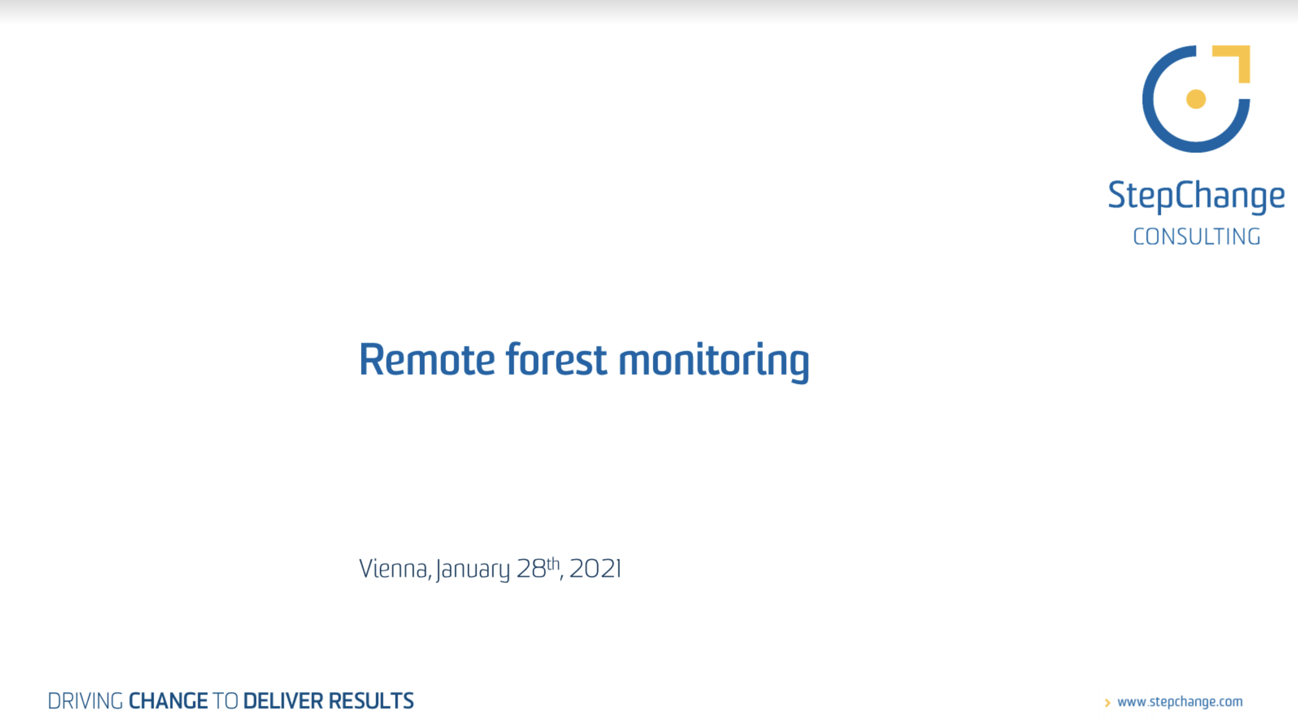 Industry feels better prepared for future outbreaks now • High approval to industry's countermeasures • Productivity unaffected for two thirds of industry players • Digitalization accelerated by the crisis • Long road to recovery expected.
COVID-19: Were you prepared? Would you be now? 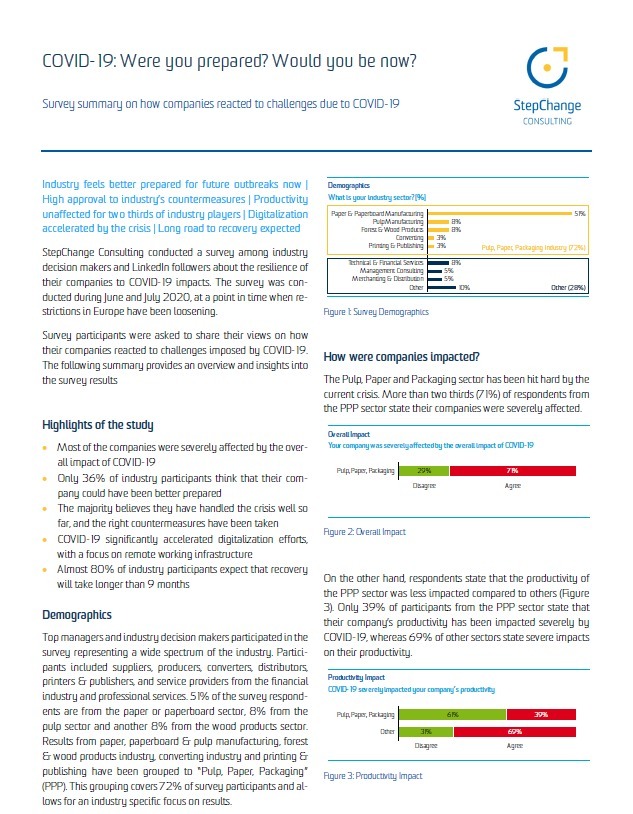 Presentation held at Bioenergy Congress in St.Petersburg, by Alexey Beschastnov, 2020
Current situation and long-term trends, affecting the development of bioenergy. 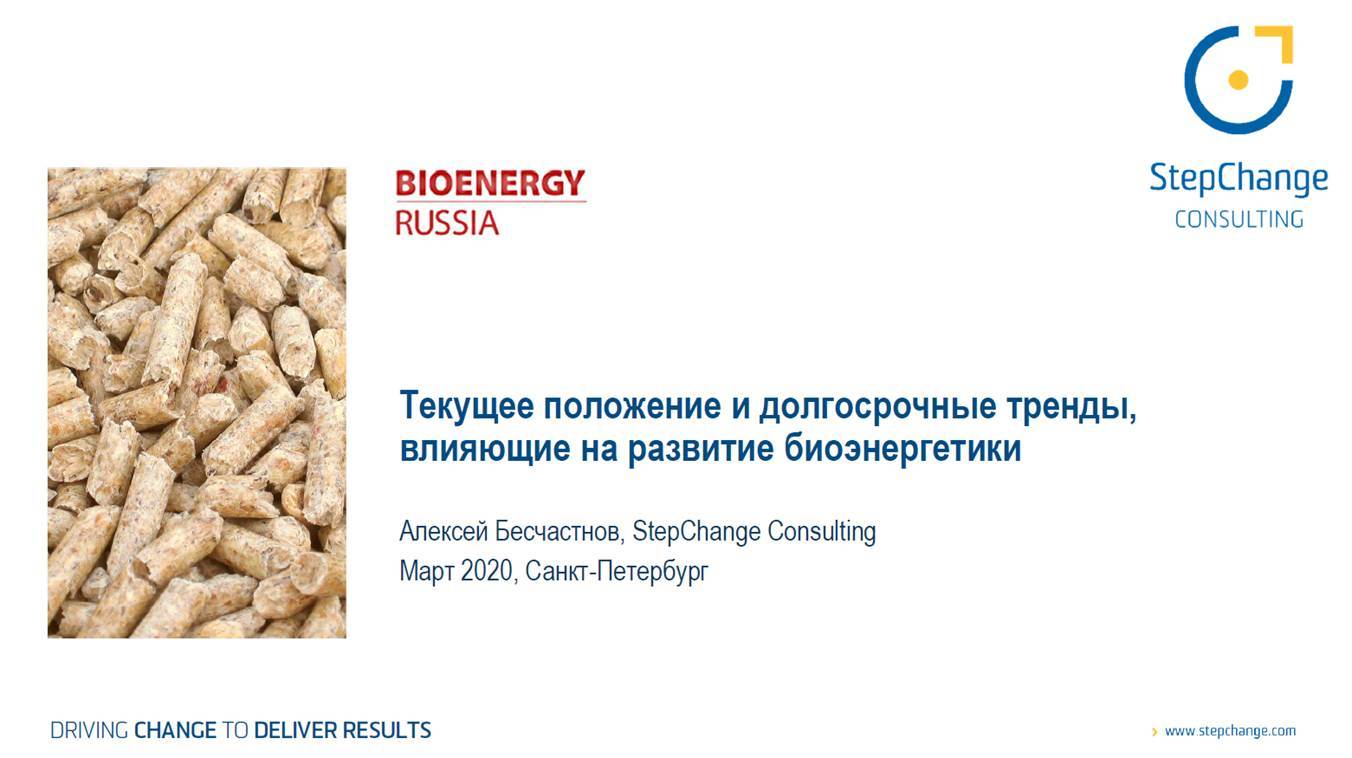 Download
B3NCH update: A Review of the financial state of the industry 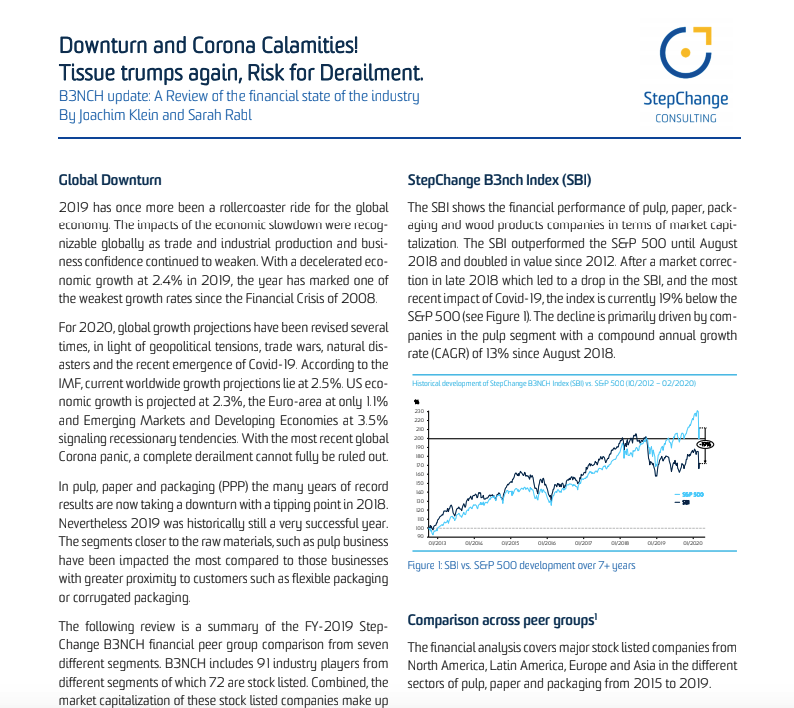 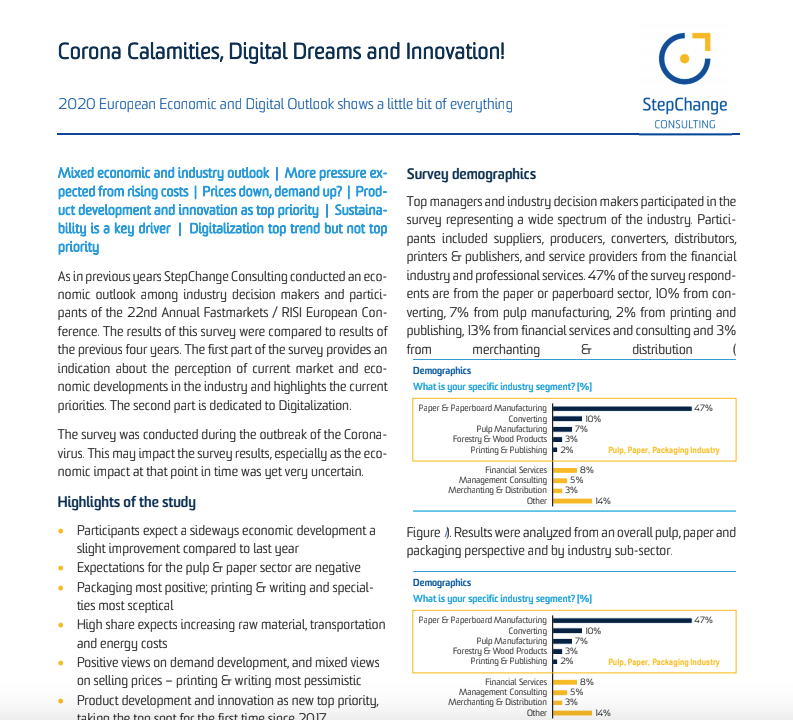 By Joachim Klein and Sarah Rabl, 2019
HR - The Forgotten Child?

By Alexander Wirth, 2019
Digitalization in Tissue: Significant potentials yet to be captured

Download
Digitalization has become top of mind in the industry • The technical platforms and capabilities for digitalization already exist – opportunity for early movers • The highest benefits are expected in cost reduction and in supply chain • Most digitalization/Industry 4.0 projects are in the operational environment • Top barriers are lack of awareness, change management requirements, technical infrastructure and a missing ROI

Presentation held at Tissue World Milan, by Joachim Klein, 2019
The mill of the future — Digitalization & Industry 4.0

Published in Russian Forestry Review #8/2019
By Alexey Beschastnov and Dr. Veronica Schey, 2019
Good year 2018 for Russia, and changes ahead

Abstract of presentation held at Symposium der Papieringenieure 2018 in Cologne

Signs of slowing growth • Pricing, product development, and M&A key priorities • US confirmed as most attractive region • North America ranked most competitive location globally • Skepticism about benefit of Smart Manufacturing
Full steam ahead or time to take a breath?

Download
A view on the industry's readiness for Industry 4.0, and Digitalization in the value chain

Outlook study reveals expectations of a further strengthening of the economy in 2018 • Growing demand and price increases expected for the coming year • Company priorities on pricing, margin management and cost reduction • talent acquisition and retention with stronger importance • Europe attractive industry location due to infrastructure, qualified labor and domestic demand
Up, up, up – the only way is up?

Download
A review of the financial state of the industry

Download
A view on the Industry's readiness for Industry 4.0 and developments since 2015

Awareness about Industry 4.0 increasing • 35% of companies with concrete projects • Industry 4.0 not a priority • Expected benefits: costs reduction and new business models • IT budgets up • Pulp & Paper trailing other industries

Published in IPW (11-12/2017), the magazine for the international pulp and paper industry By Alexander Wirth, 2017
The Role of Industry 4.0 in the Market Context of Coated Paper and Board

By Joachim Klein and Sarah Rabl, 2017
Paper, Packaging and Populism

By Joachim Klein and Valentin Schenkenfelder, 2017
Diligent Due Diligence

By Dr. Veronica Schey and Georgi Krastev, 2017
Good Buy II – Get me results!

Download
Results of 2017 survey assessing current and future collaboration in the supply chain of the forest based industries: Demand and prices for all raw materials expected to grow • No demand, supply and price increase for graphic paper expected • Sales channels seen as efficient by sellers and buyers • Industry sees itself lagging behind other industries in terms of collaboration • Buyers perceive overall higher benefits from collaboration compared to sellers • Key barriers: Dependency on specific partner, lack of trust, unequal distribution of benefits, data security • Sellers significantly overrate customers' service level satisfaction

Presentation held at Paper and Biorefinery Conference in Graz, by Alexander Wirth and Valentin Schenkenfelder, 2016
Pulp and Paper in Austria 2016

By Ralf Möbus and Jukka Halonen, 2016
Sentiment Down – Bad weather ahead?

Download
What digital can do for the Paper Industry

The European pulp and paper industry has experienced and consistently supported the three major phases of industrial transformation since the 18th century. From steam power to electric power, then to the progressive integration of automation and information technologies, today's paper industry stands ready to engage in its fourth industrial phase: industry 4.0.
Industry 4.0

By Alexander Wirth and Thomas Teltscher, 2015
Making a difference: From consistently in-constant towards consistent constancy

Download
Results of 2015 Pulp and Paper Outlook and European Competitiveness Survey: Demand stable / prices and costs down / financing up / packaging up / graphic papers down / focus on price and margin management / strategy is back / Germany and Poland most attractive in Europe / Mondi, DS Smith, UPM, Smurfit Kappa and SCA considered most competitive / Hopeful for positive influence from capacity consolidation and customer requirements
Temporary relief or tipping point?

Download
A view on customer segmentation in paper and packaging

Download
By Alexander Wirth and Peter Khaut, 2015
Right location but close to the tipping point?